On the morning of December 3, at General Merchandise Store and Supermarket AEON Long Bien held a press conference for "Cancel the import ban - start selling Japanese Unshu Mikan tangerines". The event was organized by JETRO Hanoi in collaboration with AEON Vietnam. AEON is the first retail system in Vietnam to introduce to Vietnamese customers more than 1 ton of Unshu tangerines imported from Japan. 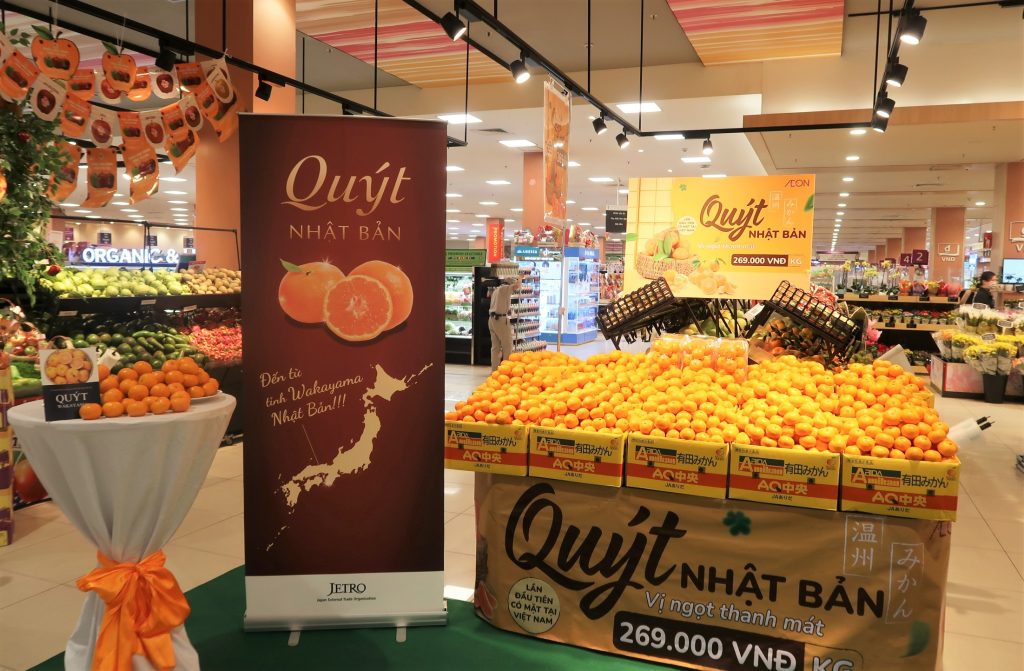 The first Unshu tangerines from Japan are at AEON Supermarkets nationwide

The press conference to launch Unshu Mikan tangerine welcomed the participation of Mr. Daisuke Okabe, Ambassador of the Japanese Embassy in Vietnam and Mr. Nguyen Quy Duong, Deputy Director of Plant Protection Department, Ministry of Agriculture and Rural Development and Mr. Keisuke Kobayashi, Deputy Chief Representative of JETRO Hanoi Office and representatives from AEON Vietnam. The event attracted the attention of many customers. 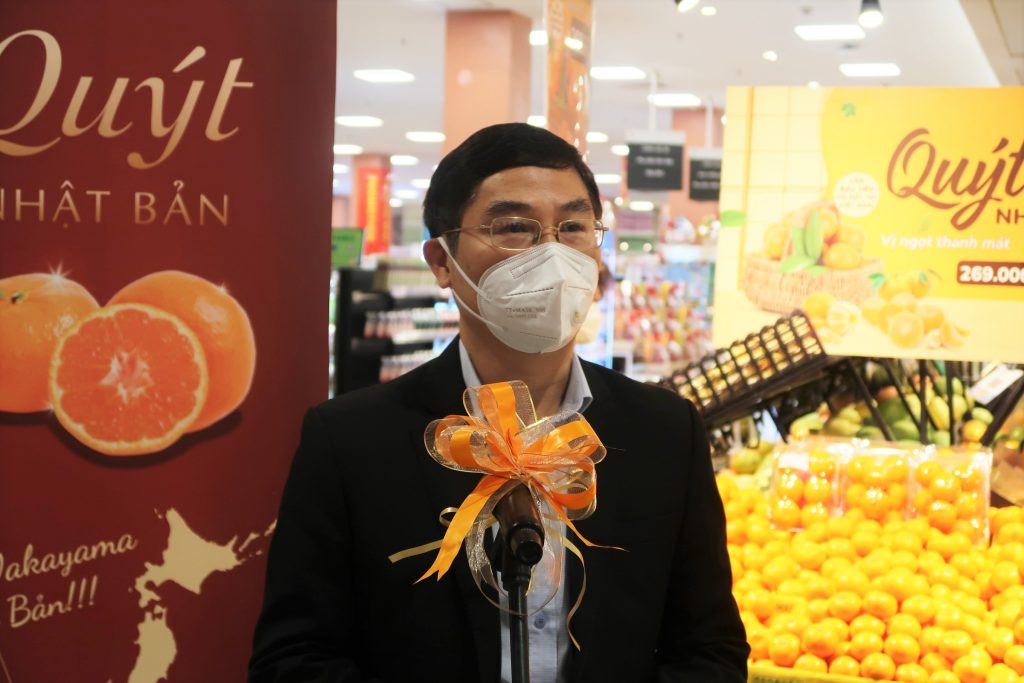 Sharing at the press conference, Mr. Nguyen Quy Duong, Deputy Director of Plant Protection Department, Ministry of Agriculture and Rural Development shared: “Bringing Unshu tangerines to Vietnam is the result of efforts from the government, organizations as well as businesses, demonstrating the close relationship between the two countries and the development of Vietnam's economy.” 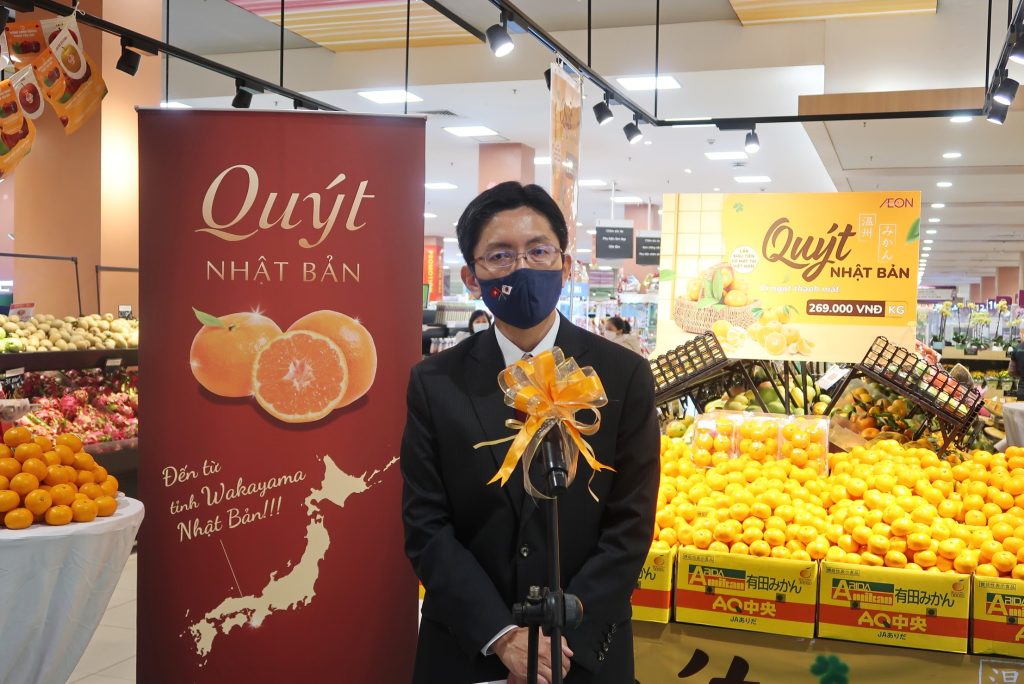 Mr. Daisuke Okabe, Ambassador of the Embassy of Japan in Vietnam gave a speech

“Up to now, there have been apples, pears and now, Unshsu tangerines imported from Japan to Vietnam. We hope in the coming time we can continue to promote the import and export of fruits between the two countries, with some fruits such as muscat (green milk grapes) from Japan and longan and pomelo from Vietnam.” Mr Daisuke Okabe, Ambassador of the Japanese Embassy in Vietnam said. 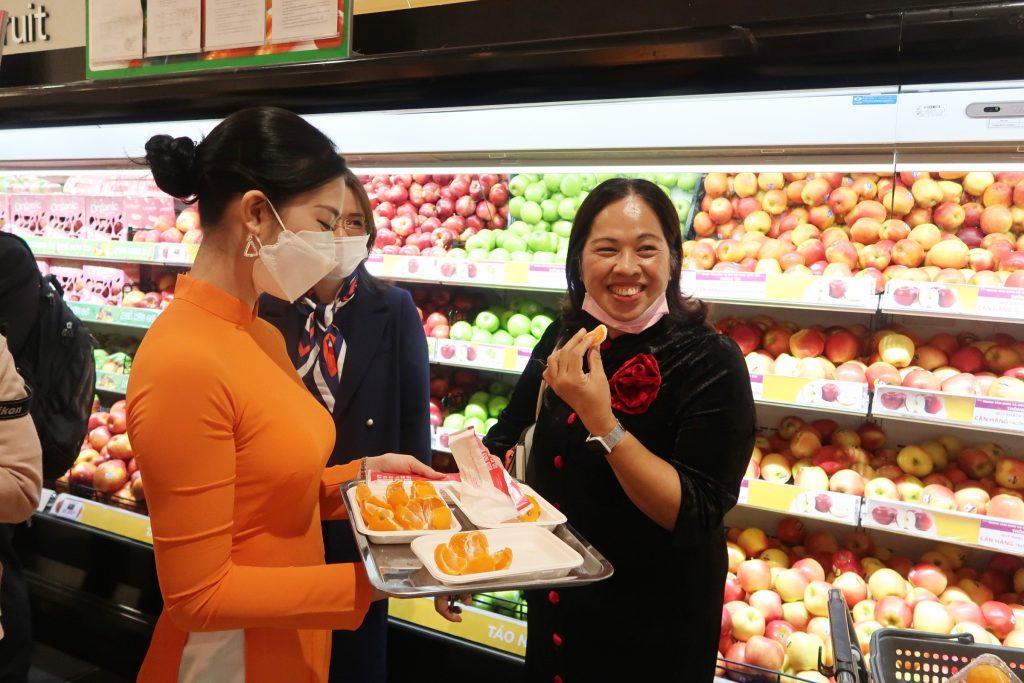 Tangerine is a typical fruit grown in many warm climates in Japan. Japanese Unshu tangerines are bright yellow, thin-skinned, sweet in taste, and have no seeds. Previously, in October 2021, Japan's Unshu Mikan tangerine ban from being imported into Vietnam has been canceled. Right from mid-November, AEON Vietnam immediately coordinated with suppliers to promote this speciality fruit to introduce to domestic consumers. On November 23, during his official visit to Japan, Prime Minister Pham Minh Chinh, former Prime Minister Suga Yoshihide and Chairman of the Japan-Vietnam Friendship Parliamentary Union Nikai Toshihiro also attended the departure ceremony to deliver the first Unshu tangerine batch Japan to Vietnam market. 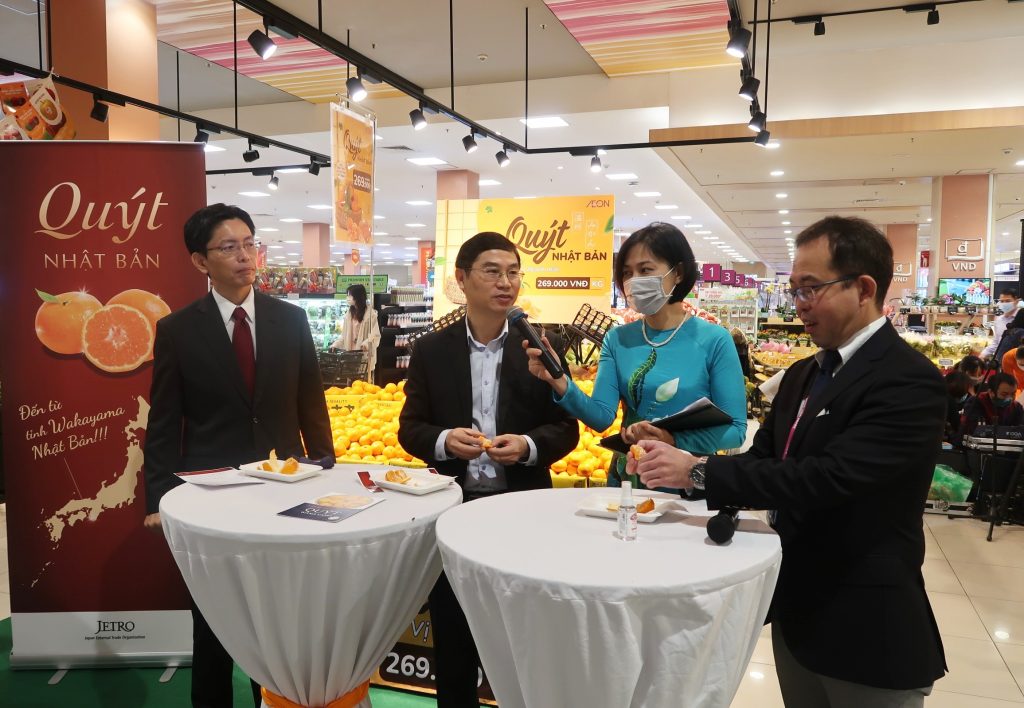 On December 1, the first ton of Unshu tangerines arrived in Vietnam, and was sold at the AEON GMS system nationwide. Representative of AEON Vietnam, Mr. Nishikawa Satoshi - Northern Regional Director of AEON Vietnam, shared: “We hope that in the coming time, restrictions on import and export of products between Vietnam and Japan will be canceled, especially for fruit and agricultural products typical of the two countries will be gradually loosened and removed, so that consumers in the two countries will have the opportunity to enjoy more new specialities."

AEON Vietnam's representative also said that in the first days of opening for sale, Unshu tangerines received the attention and love of many Vietnamese customers. The company will continue to promote connection activities to introduce more products to meet the needs and consumption trends of Vietnamese customers in the coming time.